Back in the 90s I lived in Stillwater, OK. It's an a pretty interesting place. In some ways I think it's the buckle .....I even had a guy chase me down the hall where I worked, yelling at me, telling me I was going to hell because I said I had doubts about the existence of God. Everything's a bit crazy down there (then again it's crazy everywhere), but I think it may be a slight bit more so in OK.... Maybe it's because it's smack in the middle of tornado alley.
And yet, OK is OK in my book for one reason... the Flaming Lips are from Oklahoma City and if OK can produce something so wonderful as that band, then it's gotta be all right on some level.

Wow, did I digress.

Anyhow, this is the story about this song:


Trip Down to Dallas
There was a guy I knew where I worked. He managed a drafting team and I kept their AutoCad workstations running for him. We ended up going to Dallas for a conference on GIS systems. I can't say at the time that we were friends so much before we left (we got along all right, but weren't really close), but as four of us drove to Dallas, I got to hear some of his story. He grew up in some town in OK (I can't recall now) and used to drag race when he was younger. I'm not talking about street racing... he actually raced at a dragstrip. But he had problems with his nerves and just before the green light turned on, his foot would start to shake. At some point he got drafted and ended up in Vietnam. When he returned he got an engineering degree and worked for the petroleum industry. He got married, had some kids and ended up managing the technical drafting team.
Because the place where we worked didn't have it in the budget to get us each our own rooms, he and I ended up sharing a room. He was overweight and snored louder than I recall anyone ever snoring before (even my Grandfather who could shake the whole house). At that time he was in his mid forties. 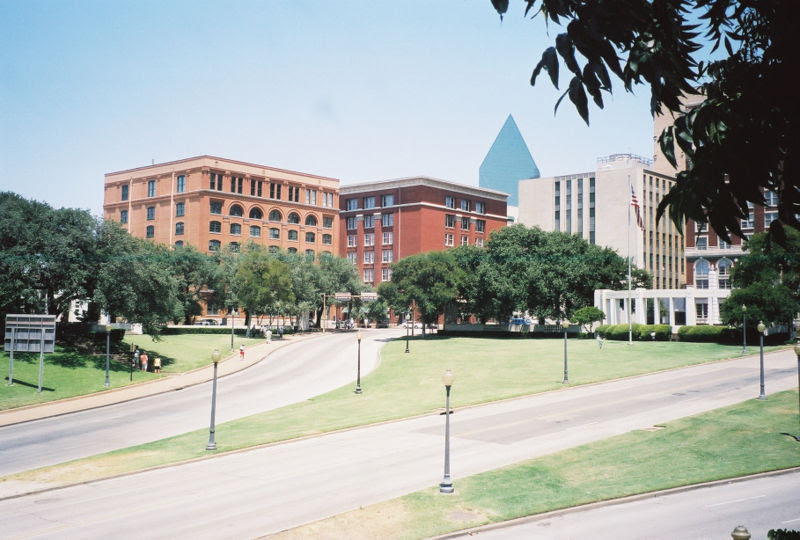 One night he and I decided to walk down to Dealey Plaza. We ended up talking for hours and many of the things we said ended up in the song. He said he recalled how history and culture pivoted around JFK's assassination. Everything kind of turned upside down. It seems like the old rules no longer applied. He didn't seem to know whether, or not, it was a good or bad thing, but he found it unsettling. He didn't think the Beatles would have been so big without JFK's assassination, nor would our involvement in Vietnam been so great. He talked about how in Vietnam he worked on repairing aircraft and how he saw the coldness in many of the soldiers and in fact, how some of them actually liked to kill. He found that disturbing and sad. He said that was the thing he never got over.
It was this small moment in my life, but what an impression he made on it. He wasn't in my life that long (I only lived in OK for about 1.5 years). He and I didn't spend too much more time together.
He was someone who lived life on a deeper level than a lot of us. He wasn't perfect and he bitched a lot about the authority figures around us and some of the people who worked for him were afraid of him...but he always treated everyone with respected and never criticized people. He wasn't necessarily a friendly man, but he wasn't mean or cold. My last memory of him was the two of us waiting on some steps for his wife and kids to pick him up. I don't even recall what were talking about, but I do remember him saying his back hurt.
After I moved away I found out he had bone cancer. I never called him because that just wasn't what we did (and part of me was afraid to...not of him, but of the cancer). I got a call about a year later from one my old co-workers and found that he had died that night from the cancer. It hit me kind of hard because he had made such a strong impression on me and I never told him. I did actually write those letters... and I never sent them. It never seemed right to...
Posted by M1 at Thursday, October 11, 2007