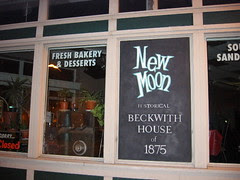 What a show at the New Moon last saturday. Than ks to a booking "snafu" we ended up on six act bill. Due to a lost calendar the New Moon owner booked three acts when The Willis's front man had already lined up four bands. The result? One great show with lots of diversity. then hitting the Reptile Palace and some rehersal studio's for after parties...Oshkosh was a shit load of fun. Great audience, cool people and great music. 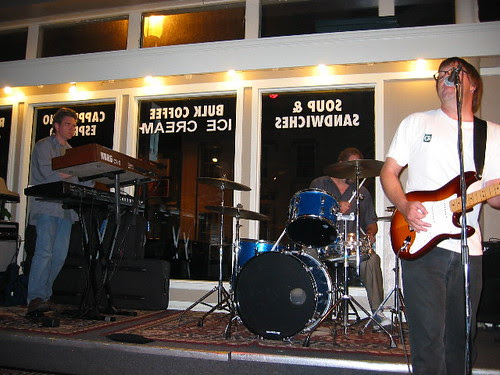 Then Old Seed came up but we didn't get a pic of him so here is one from his website and some info and his website is here
I chatted with Old Seed between sets and he's been traveling all over the world playing his Neil Young meets Dylan, meets John Prine singer songwriter show. He's got a depth and genuine soul...we donated our cut of the door to his bus ticket to Winnepeg.

After Old Seed came The Collective. We did not get pix of them either but they were sporting viola and cello. I'll edit with more info on them. They were also quite good.

Then Southerly, a singer songwriter who Old Seed thought was like Nick Drake and Elvis Costello. 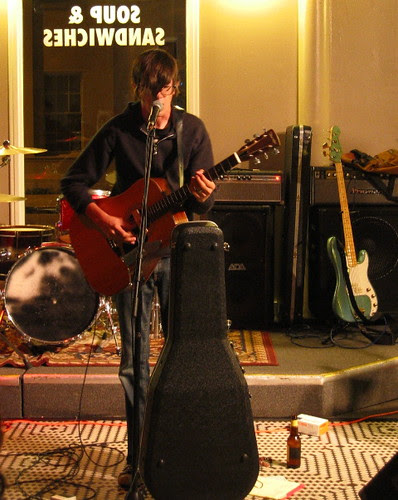 Again another most excellent set. We got his disk as well....signed too. All the acts we got thier disks except Willis...they didn't have one out yet. 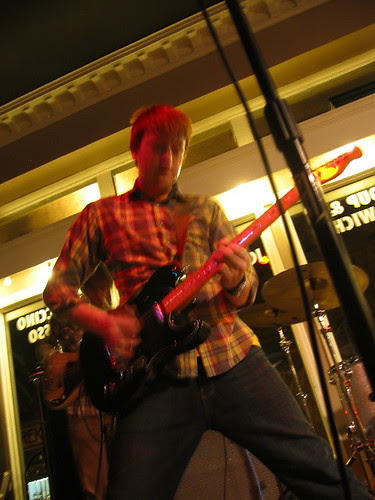 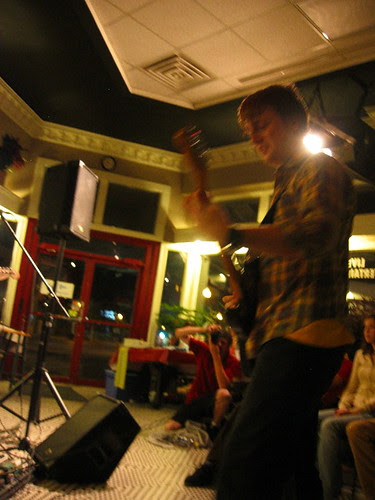 Then the most awesome The Willis... 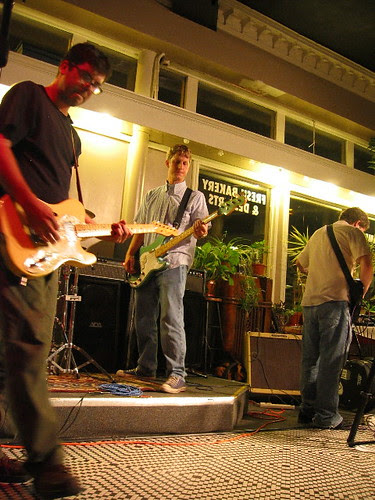 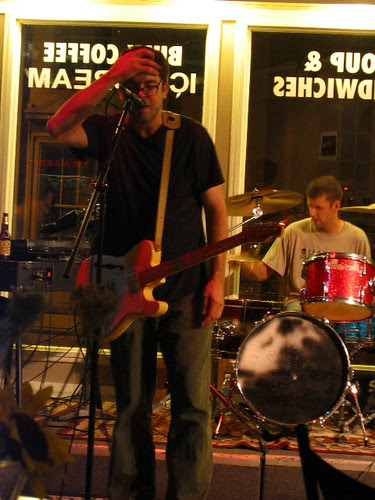 After the show broke up we headed off to the Reptile Palace....that will be in part two...

Photos by Vanessa, Brad and M1.

CD Is On CDBaby

Well all the pieces are coming into place now. We are getting the disk out into stores around SE Wisconsin. Making contacts for wider regional distribution and the media campaign has started with mailings to regional and national publications for review. We have also started a Radio campaign focused at regional indie and college radio. With the occasional commercial station that has a indie show like WJJO in Madison.

Over the coming weeks and months we'll be expanding the exposure of this disk in an ever widening circle. Our goal is to sell 10,000 disks by this time next year. We are at the very start and it is a long haul to get to that mark, but anything is possible.

The whole CD thing is just one part. Digital distribution is going to be important as well. iTunes, eMusic, Napster and a host of other online pay for download sites are on the list and we'll be maintaining our online presence with Podcasts, this blog and our MySpace site.

Right now "Strip Mall Heaven" should be in the listening kiosks at Atomic Records in Milwaukee. So if you are there make sure you stop in and you will get a chance to preview the entire disk.

We made our first "road gig" as Soul Amp this past weekend. We played at the Klinic Bar in Madison. the Klinic is on Park Street near campus of UW. Neat place actually and rather good sound.

After loading gear, we piled into m2's truck, with me riding "bitch" in the middle. Being the small one you know. Had a couple of errands to run so we left Waueksha at 5:30. Got to Madtown at 6:30 and stopped at WORT radio to drop a disk off. WORT is one of the coolest Radio stations. Like WMSE Milwaukee and KFAI in Minneapolis the station is a community radio station with lots of cool music. So needless to say it was a "must stop".

We went in a dropped a disk to a very nice woman, she put it in the station manager's box and asked us about the band. 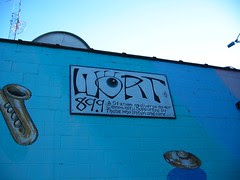 M2 and Brad standing outside WORT Radio in Madison.

After that we headed to State street to put some disks on consignment at The Exclusive Company Wisconsin's largest indie record chain. (I think). We walked right past the store and ended uphaving a brat and beer at State Street Brats. On the return trip down State we found the store and placed 5 disks with them. I am checking in what it will take to get in all their stores.

And there we are...our name almost in lights.... 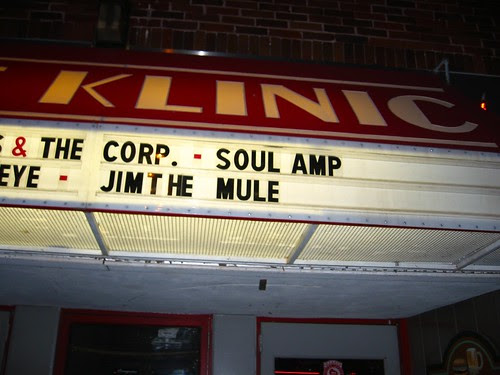 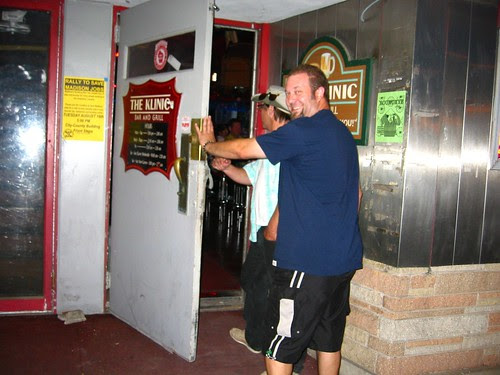 M2 and Brad heading in.

Gig went well. Johnathon Kuss and the Corporation had apparently cancelled and we played two sets infront of PINE. A cool EMO like rock band. We had a good time. Loaded out and watched Pine. Suggested they get over to madPlanet and play some all ages shows. They would do well. Intereting note. Madison has a smoking ban in effect for all bars and restaurants now. It was amazing. First time ever for me to play a gig and not smell like smoke afterwards. However there were times when half entire audience would get up and walk outside for a smoke. They said "we can still hear you..". 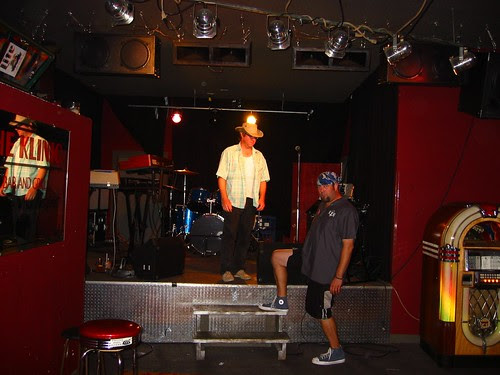 The stage at the Klinic.

We played pretty good. Thoguh the second set was hit or miss as we hadn;t counted on playing a second set. But they loved us...and we had fun. Sold ONE disk and covered our gas with our cut of the door. Trevor made sure we had plenty of beer for playing another set...
Posted by Bradly O. at Tuesday, September 06, 2005 No comments:

Disks are at Cosmic Records in Waukesha now,

CDBaby account is being set up. We have to send them some disks via snail mail so it will be a week or so before it is available.

Atomic Records has agreed to handle a few as well. We'll be dropping some disks to them in the coming days.

Right now best bet is at gigs or to bump into one of us in Waukesha at SPrizzo on wednesday's. We ussually hit the feed bag there before rehersals.

The CDs arrived from the manufacturer on Tuesday. They look great. We'll soon post information on where they can be purchased (locally and online).