Thanks for stopping by.

Enjoy the music by geeks for geeks. (well mostly)

Oh and your app...well, the SQL wasn't tuned very well and was destroying the production DB....I had to kill your app server session...

Well we've pretty much settled into the new space. Some of the first sessions have been done and we're getting the kinks worked out and have made some huge improvements to the way we record. One of the biggest is using two mics on the Motion Sound one on the horn and the other on the low rotor simulator. The Motion Sound has a 800 hrz crossover (just like a Leslie) so after some experimentation with various mics we now have way more flexibility. The Kurzweil PC2 piano is now brought into the MOTU 828 via SPDIF stereo input. So now we have total control of the key board tracks...now four. (R&L stereo on the SPDIF and two mono on the motion sound.)

So the last four mp3s posted on this blog and on our website have this configuration for keyboard tracks. The result is a much more defined and complex sound. We have way more control over where things go in the mix now... We can pan the low end from the motion sound to one side and bring the spinning horn up front.

If we lay in a vocal on these experimental writing/recording session we pull one of the drum overheads. We did this on Perception track. Probably not a long term solution but these tracks we release are early version of more developed tunes...

So anyway the freebies we pony up are really working mixes from our studio. Not final versions of anything and sometimes we are simply on fishing expeditions looking for interesting sounds and combinations of sounds.

These tracks were recorded live and mixed that night so the guys could have burns of them to listen to. I post the mp3s on the blog so I can get at them at werk and from home and share them with anyone interested in following the progress of band as they write new material. When we post a Mp3 link to this blog it is automatically podcast. Those familiar with feedburner know what I am talking about.

I went back into the archives of this blog and already I can see there has been a lot of changes in the two years we've been together.

Where are we going? I don't know...if you've listened to any of our stuff you can pretty much tell that. We have a multitude of ways we are working....maybe that is bad...maybe it is good...I guess the next disk will tell if we are on the right track. My gut tells me we are and yet it also tells me we need to focus and take more chances musically...one thing that is appearing we are adding more textures, definitely doing more jamming...and letting things organically develop. We're not playing any gigs in March to get caught in the studio....we'll gig some in April and submit for Summerfest and Harborfest...

Right now we are dealing with tempo issues. We're trying some stuff. All of us are making the point to spend some time with metronomes at home when practicing. We all have little quirks that when we combine them together causes some issues. Nothing major....as long as it is musical. You can hear this work happening in the that long jam Fuzzy Rainbow Monkeys...with the pulsating Wurli loop Fisk devised. I dig play these jams they loosen up everything and as a result we wrote recorded a rather cool take of Perception right after Fuzzy Monkeys...

Well that's it 4 now. I'll post some snaps of Farkusville studio soon. Thanks for reading.

smoking the drapes...get your smoke on fuzzy rainbow monkey

What is your Perception....

McAuliffe's Pub and The Dammitheads Show 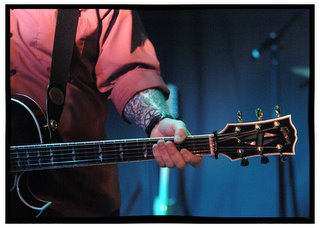 A big huge thanks goes out to The Dammitheads - David and Steve, Jennifer, JJ and Ryan McIntyre.

I can't say enough about how comfortable we were playing at JJ's club in Racine this past friday. The vibe was genuine. The crowd was great, friendly and they love live music.

It was one of those moments.

Thanks for having us.

Well I just settled into bed....the fold out futon. It's 2 a.m. and I'm a bit amped up from the HOG gig and I wanted to jot down my thoughts with the buzz I have going.

Soul Amp - loves you...I love you. No shit. tonight I got to watch faces as the lights were not blasting in my face. I was able to make eye contact with lots of people tonight and I saw faces. I saw the faces of my generation...and they were smiling, laughing and talking with people I know....

I felt this love and I had to tell them. Right there on stage I said "I love you". I know it doesn't sound like much as we have heard all the big names say "I love you..." but now in some strange way I think that maybe they really do.

We are such an age classified society. The young challenge all that is old and the old negate anything young so as to not encourage them. That is just wrong...fortunately sometimes you get both young and old sharing a moment, together. Strangers. That happened at the HOG. For a time the early older corwd combined with the younger late crowd and we were there on stage, a bit akward but it happend. The twentiy somethings mingled and mixed with the 40 somethings...

It was good. that is when I said I love you.

The Rolling Stones rocked the SuperBowl....

There are only a handful of bands that could play the Super Bowl without a safety net and the Rolling Stones in all their chewey sloppiness showed the Super Bowl watchers that they can still rock. They were gritty, spicey and skinny like a meat stick. Keith still looked like death warmed over like he alwys has, Mick was stomping like he always did with a little less grace a little less crispness but still was entertaining and giving it all. Watts was solid on the kit as usual.

So I tip my hat to these uber rock geezers. In a time of painfully self conscious and introverted indie pop it is simply refreshing to see some good old slop bucket rock and roll. It is what is was and it was one of those great moments in rock on TV. - Nirvana Unplugged, The Replacements and recently System of a Down on SNL and Elvis Costello playing Monkey to Man or Wilco's apperance on Letterman. Some may disagree in putting the Rolling Stones on that list but I think time will show that it was yet another peak in an amazing career for the Stones and possibly the swan song.

The Rolling Stones have continued forging new ground in Rock. Maybe not musically, but showing what a life time career in rock is and may actually redefine what everyone thinks a "rock" life is supposed to be.
Posted by Bradly O. at Wednesday, February 08, 2006 No comments:

My Old Kentucky Home blogged one of our tunes.

Thanks My Old Kentucky Home
Posted by Bradly O. at Wednesday, February 01, 2006 No comments: