We'll be returning to The Klinic on thursday November 10th. The Dammitheads from Racine and Jeff Caissie from Madison will be joining us.
Posted by Bradly O. at Thursday, October 27, 2005 No comments:

We'll be at the Main Stage fronting Standing Noise as they rip through all of Led Zep II.

We are wearing a "sound costume".

We're gonna to a "jam-band" type set...and toss in a few songs. Should be fun.

Hey folks. We've sent more disks out to CDBaby to replenish inventory after this past weekends gig in Milwaukee. The article at OnMilwaukee.com has emptied our inventory at CDBaby.com so hang on more are on the way.

On Milwaukee.com has written an article on us and has given the first press for "Strip Mall Heaven".

We are totally stoked.

One would not expect a traditional Irish pub known for it's depth in presenting international touring Irish bands to host a local non-Irish rock band particularly one that plays all original music. But when it comes to rock it is hard to pin down Soul Amp. Soul Amp is known for their songwriting and eclectic performances that run the gamut of indie pop, adult album alternative, rock and Americana. Toss in a little jam or two and even a raucous pop punk tune you have a enjoyable evening of music from one band.

The Waukesha three piece of guitar, keyboards and drums has shown they can adapt to a variety of venues from coffee houses to hard rock venues across south east Wisconsin, drawing on a music catalog of dozens of original songs, flexibility and a keen stage awareness.
The band's debut album "Strip Mall Heaven" released on their own label is a sampling of the many songs written, recorded and produced by singer/guitarist Brad Odland and keyboardist Mike Fisk. The disk has challenged recent reviewers to pin this band down but find that there doesn't have to be any pigeonholing required to enjoy the finely crafted songs and improvised excursions from this atypical band. Waukesha native and veteran drummer Mike Netteshiem completes the trio.

More about Soul Amp visit the band's website at

House of Guinness is located at 354 W. Main street in historic downtown Waukesha.

http://www.houseofguinness.com
Posted by Bradly O. at Thursday, October 13, 2005 No comments: 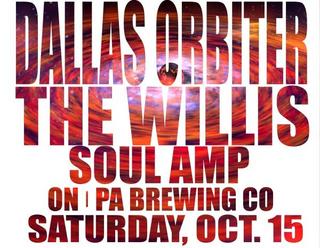 I set up a profile and we've been accepted to Purevolume.com In a few days you can play two tracks from Strip Mall Heaven there.

Also we got a play of "Seeing Jimmy" on Milwaukee's Alternative 102.1 thanks to DJ Kramp and his show "The Scene".

And here is another plug for October 15th....
Also don't forget about October 20th at the House of Guiness in Waukesha. That is going to be an earlier show and will be a up close and intimate evening of music. We'll be doing some jams in addition to our songs and we'll be mixing it up a bit on the intstrumentation quite possibly. All in all it will be a nice all Soul Amp show.
Posted by Bradly O. at Wednesday, October 12, 2005 No comments:

We're playing Onopa Brewing (http://www.onopabrewery.com) this coming Saturday Oct 15 with Dallas Orbiter (http://www.dallasorbiter.com/) and The Willis ( http://www.myspace.com/thewillis). Show starts at 10 PM. Be sure to check out the music on these bands' websites. They rock.

I ran across this site the other day

It is a humbling place to visit for any new band. It is a site celebrating all that is bad in local rock music scenes everywhere. You know mullets, brickwalls, railroad tracks, bad metal. They should rename the site "whatnottodoinarockband.com"

After you stop vomiting and questioning every last thing you have done, make sure you view the RRCTV video's. Specifically episode two with Phraap. Because the vast majority of rock and roll is exactly what those bands are and we all have some level of douchbag in all of us...(ewwwww yuk....I can't believe I just typed that...lol)

Funny thing is the spirit is there....misguided as it maybe, as schlocky as it is you can't help but be drawn in by the band's dedication to underachievment. Lucky for the band who find themselves under the eye of RRC as it may be the only modicum of fame they will grasp. It makes one wonder just what defines success? A big contract? Millions of dollars...or simply to play a decent show, get paid, make a album or two and maybe touch a few people along the way...(hey don't go there...). I know for us it is simply do what we do and move on. Maybe sell a few disks here and there and write some decent songs that at the end of the day you can still stick in the CD player and listen to once in a while. I know I have boxes of old recordings, song ideas that every once in a while I take out and listen to....and ask myself...."What the hell was I thinking?" As M2 puts....it's the "horror" part in "for the glory and the horror" that is rock and roll. It is inescapable for any band to avoid. There will always be the horror you just have to cope with it...learn to accept your inner "douchebag"....(oh man I am cracking myself now.) That is what this blog and our podcast is all about. Call it a movement...a large, foul and uncomfortable hard rock movement as bands are exposing themselves more and more on the internet in attempts to climb above the fray. (how about that imagery...)

So maybe the band Phraap is perfectly comfortable with their stoned and drunk douchebag rock and roll status...so it's okay to laugh with them and maybe take a pull too. It's all part of the show.

One thing is for sure....I am glad we didn't use the brickwall pic....though I must admit...this one could make the hall of douchebags....

P.S. - If you are thinking of submitting us...don't bother I already did.
Posted by Bradly O. at Wednesday, October 05, 2005 No comments:

The quest for reviews.... 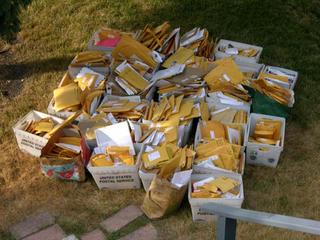 This is from Splendid Zine.

It is the CDs they threw away....many unopened. Unassigned or awaiting review.

I am sure this is the same at every magazine and places where artists are looking for reviews. So just sending a disk is not really enough.

There are forty-seven million other bands clogging inboxes.

Listening to SomaFM's "Indie Pop Rocks" channel on iTunes Radio it becaome painfully clear just how much really great music is made everyday.....