Dual Processor Mac off to get fixed....

The brain of our recording studio, the dual processor Powermac has been disassembled. The logic board, processor module, video card and RAM have been shipped to a place in California for repair.

Not the biggest news but that dual pross box is missed.

Time for a little reflection on the state of music. As an indie act one of the big challenges is connecting with the audience. On stage this is not difficult. The audience is present and is exposed to not only the music but also the band's persona. Playing clubs gives the audience the ability to see the set up and tear down also the chance to talk with band members.

Online it is another matter. The connection comes from exposure, interviews, press, marketing and promotion and the access to music. Yet still there is also a personality that emerges thanks to the intimacy of the internet. For instance you are reading the actual words I am typing into this blog. We are connected in that way. BLogs and sites like Myspace offers musicians and fans unprecedented interaction...it is like a giant dormitory. You can stop and visit freely and people are more open to interacting with new faces. Bands to are opening up more and being more personal with potential fans.

The music industry is struggling with this intimacy. Carefully packaged images are still successful but we have seen artists emerge from the internet that have completely bypassed the major label starmaking machine. Big packaged images set the performer far apart from reality and still have a large appeal for fans due to the celebrity that forms from the image. However the end result is "cookie cutter" corporate image and fast recycling of the same tired personas. The music industry is about taking new images and replicating them to maximize profits from the "next latest thing". But the harder the industry tries to maintain the image making model the wider to door is left open for other modes of operation.

Listeners have changed how they listen to music as well. Listeners are placing less importance on the album and focusing on the song more. Mp3 players, online playlists, iPods, internet radio have acclimated the music fan to "random play". As the listeners habits have changed so to has the artist. Albums are becoming more diverse, artists are freer create music that is not beholden to any particular genre.

That is a struggle. Because to write and create what pleases the artist is still perceived by the "old school" music industry as unfocused. The Neil Young lawsuit for a "Young not making a Neil Young album" is an example. That perception is wrong. Take for instance our album, "Strip Mall Heaven" as a album it does range across genres and requires a fairly wide range of musical taste to appreciate. However if the same music was packaged and released in multiple sets of 3-4 songs each and different picture can emerge.

An interesting model. Artist development in the 60's through the 70's was a multiple album deal spanning multiple years. This same concept will apply it is simply condensed. Now it can be a two year three release 12-14 song deal. Same concept just streamlined. The new Warner record company is doing just that. Cordless records was recently announced and it strikes me as a very intriguing business model that could potentially be the key to tipping the music scales to favor all online digital media distribution models.

What does that all mean for the future...well it is already being seen an EP is launching bands more frequently now....we may not see the CD as a media format go away anytime soon but we will see more releases, more often with fewer songs on each released at a lower cost with the bulk of distribution coming digitally.

Strangely enough music fans are more inclined to purchase 3 songs for $5 rather than 12 songs for $12. It seems the fans not so much concerned about the money but more of the intellectual capital required to get through an entire 50-70 minute CD. Fans are more willing to give 9-12 minutes to a band initially because they know it will be over soon. Call it the escape clause in the listener contract. The full length album is simply more demanding on the listener and it may be asking to much of today's listener.
Posted by Bradly O. at Thursday, November 17, 2005 No comments:

Everyone knows that bathrooms are the best place to market your band. I know when I see a band sticker on the bathroom walls or even in the urinal...I think "How cool is that." I then seek out the band and buy their CD and other merch. If it's good enough for a filthy bathroom, its good enough to wear for sure. Any band that puts a sticker in the urinal make me want to shake their hand and say "..awesome job bro that is so classy". 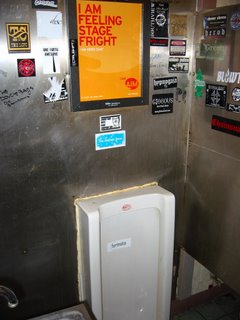 Here is some examples of band marketing worthy of Rock and Roll Confidential found at The Klinic in Madison. I am sure the bands will ensure a return gig with a well place bathroom sticker. Lots of respect here...notice how they don't overlap. These bands are true to the "scene".

I can't wait to get our stickers and start doing some "marketing". 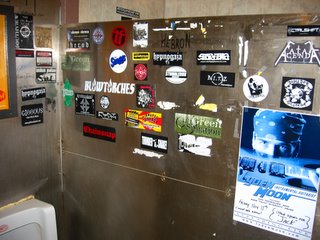 Here we are at the Klinic in Madison...

Thanks Jen for taking the snap.
Posted by Bradly O. at Monday, November 14, 2005 No comments:

Soul Amp is on iTunes

I'm stoked. Now how does one get a blurb on the front page of iTunes...?
Posted by Bradly O. at Wednesday, November 09, 2005 No comments:

We've dismatled the "Cat Box" studio. With little fan fare our home for the past 18 months has been turned over to my daughter for her band's hang out and rehearsal space.

Soul Amp has new digs in West Allis. We are building the studio up now. We've moved the gear over and still have to move the recording equipment and from fixtures. The new space is larger and more sound proof...less stinky and drier.

With that we are now laying plans for the next disk. We are winding up our gigging in December and are taking a "house: gig at The House of Guinness (HOG) in Waukesha while we write and record the next album. We'll be playing the 2nd Thursday of the month starting in December. So the next date is December 8.

We'll be giving away CD-Rs of pre-production songs as we build up a catalog for the next album. Playing the HOG on regular basis once a month gives us the a place to break in new songs nad we get the whole night. We play 3 full sets. Open up and jam and try different instumentation.

We'll still take any cool gigs that I might book. I'd still like to get to CHicago and Minneapolis before the new year is too old.