Getting around the corners... The Wood Gatherer, Jules Bastien-Lepage... Best Song....Brewers baseball... Old Man in a Painting... Capuano Quote

I think this is my favorite Soul Amp song. It's a very personal song and the piano/guitar middle and end part is so touching... still gives me the chills sometimes. I hope we redo it sometime. What follows is the story on this one: 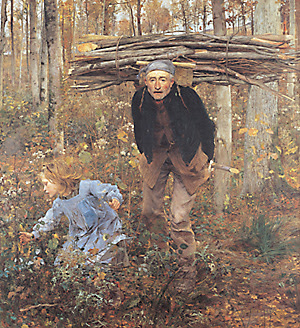 The Wood Gatherer, Jules Bastien-Lepage
Here's the song:
Old Man in a Painting
Here's the lyric:
http://soul-amp.com/other_lyrics.html#Old_Man_in_A_Painting
This song was written on a day when I was down and out. I was wondering around downtown and feeling like I didn't exist. It's embarrassing to admit that I was feeling a bit self destructive and a lot of feeling sorry for myself. Rather than toss myself off something I went to the Milwaukee Art Musuem and just wondered around look at what people had created. I came across The Wood Gatherer, by Jules Bastien-Lepage and it really struck me that day. I don't recall exactly when the lyric was written, but sometime later. The last bit of the lyric even seems to reject the whole thought. Now I look on it as part of the proverbial journey and not giving up and just plugging along and looking at the beauty that's all around if we want to see it and making stuff to add to the world...it's a bit like something John Lennon said...something about glory should go the survivors not the martyrs (or something like that... I can't recall).
It also reminds of what a Milwaukee Brewers player, Chris Capuano, said a bit a go:

And speaking of Brewers, here's a spooky sort of bit to this whole story. I was searching for info on the painting and came across this link at mam.org. Check out this pdf http://mam.org/pdf/Brewers.pdf. It lists the favorite art pieces of some of the current players of the Milwaukee Brewers. Turns out that one of the players, Damien Miller, says it's his favorite piece at the musuem. The funny thing about that is that there are those (a few of whom are very close to me) who think I look like Damien... they call him my cousin.... hmmmmmmm......

So I would have to call that an example of synchronicity.