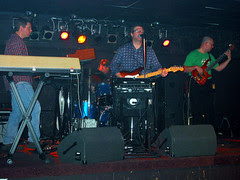 Heres a shot from a fan from the Main Stage gig on
Saturday. The gig went well we made some good bucks
and played to a warm crowd of about 60-80 folks. Most
were chatting and drinking....but hey it is a bar
after all.

We played two sets. Pretty much all our material but
the difficult Beautiful Painting tune. Starting with
most of the older stuff in the first set and all our
newset songs in the second. We probably played at
least 8 songs that had not been played out live yet.

It was a good gig. The Main Stage has great sound on
stage, free bud lite and bud for the band and a pretty
laid back atmosphere. Can't beat it. One of the better
venues in SE Wisconsin.