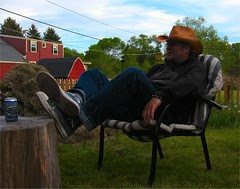 Fisk came out to the Love Shack sunday afternoon. I sold him the Tama drumset with a bunch of hardware and cymbals. He'll have a nice setup for the studio. I've got my eye on a Gretsch bebop jazz kit..nice and compact. I'll have to replace most of my hardware too..and cases..to get it to fit in the new Focus..yikes. I've been talking about downsizing for quite some time. Junking the '85 Cutlass, and the lull in my musical life, have allowed me to follow through. I played a Church gig sunday morning in Waukesha with the remnants of my old "praise band" Joyfull Noise. They recently lost their drummer to the pits of alcohol. It was kinda fun and kinda dullsville..not at all like a gig at the H.O.G.. As time away from Soul Amp marches on, I see more clearly the issues that led to our breakdown, and more clearly the need for us to mend our pain. The morphing of the "modern rock trio" into whatever Soul Amp was becoming was the first trigger in my separation. That coupled with my "id" driven desire to gig, and my increasing aversion to studio work to increase my mind funk. Then Fisk bowed out..at least temporarily. That was the nail in the coffin. Brad and I had discussed the possibility of slugging on, doing a different style of music. It sounded good at the time. What a tag team that would have been. Then I kinda freaked. I made some comments about hating studio work, and that alt rock was for gorgeous 20 somethings 'cause nobody gives a rip about us 40 somethings..regardless of talent. Those comments weren't taken well. I don't know where the remainder of my musical career will be spent, but I hope with all my psychotic being that Soul Amp, whatever it is, will someday be healed...M2
Posted by M1 at Tuesday, May 23, 2006