Decade and a 4-Track 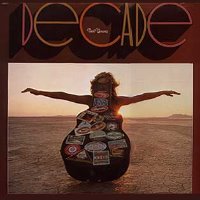 M2 bought me a present the other day. He picked up a nice copy of Neil Young's Decade. The Three Album epic from 1976.
I was most interesting listening to it and opeing up all the sleeves and pulling out the jackets. Not much to say really other than it is a sweeping collection of live and raw recordings. Pretty much captures the state of NY by the mid 70's as he was just starting to go into the country thing. I really don't know much else about the story behind Decade other than it is a compilation of material of NY's work of the past ten years. Hence "decade"...It was a pleasure to listen to.